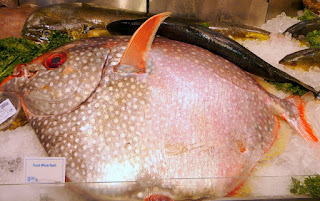 68 # "Opah or Moonfish"
Opah or Moonfish have been an underutilized species in the past. With the demand for fresh fish on the rise, Opah has found a home in restaurants. They are the most colorful of all the commercial fish landed in Hawaii and are are sold fresh at the Honolulu fish auction.

Opah are a by-catch of the long line boats that fish for tuna and bill fish and has never been a fish that has landed on the menu's of restaurants. They are never caught in any quantity because they do not swim in schools. When you see Opah served at a restaurant it is normally as the "catch of the day".

Until they became commercially popular in the restaurants, Opah was viewed as a good luck fish by old-time long line fishermen, who would give it away as a gesture of goodwill rather than sell it.
at November 07, 2008

Email ThisBlogThis!Share to TwitterShare to FacebookShare to Pinterest
Labels: Fish