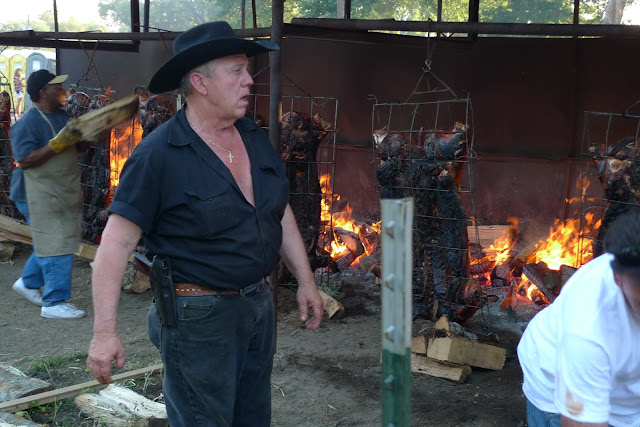 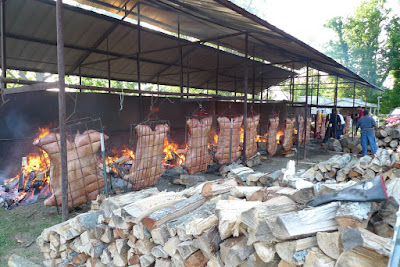 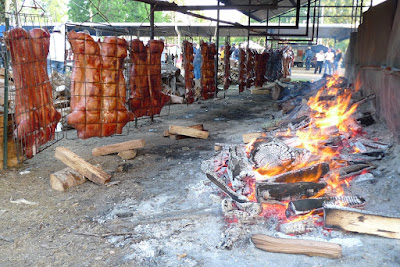 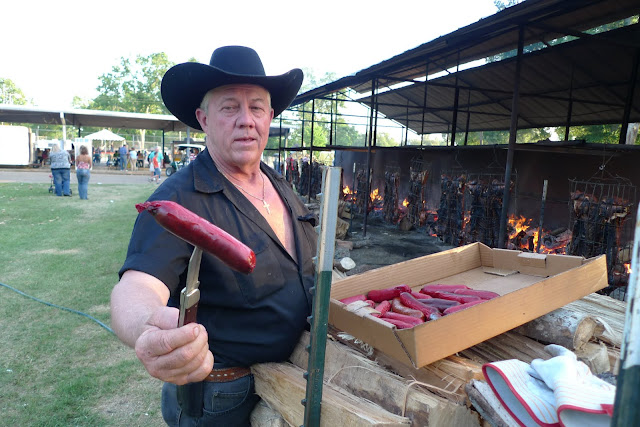 Gerald Wayne  with his pig sticker sampling the homemade links 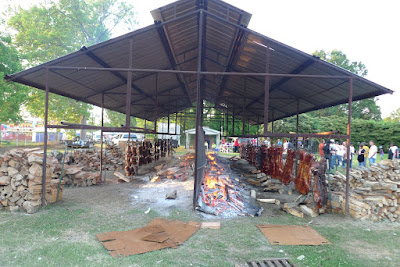 Hogs and Shoulders hanging in the Barbecue Barn


Last week while in Grand Isle, Louisiana I noticed on my calendar that the Mansura Cochon de Lait was coming up on Mother's Day weekend.  I had missed it last year and made a note to make sure I made time to make the drive to Avoyelles Parish in East Central Louisiana.
Everyone from Avoyelles Parish  knows how to have a Cochon de Lait (Suckling-Pig) and people in that neck of the woods have one of the largest and best pig roast in the state.
Avoyelles Parish is  where the Red, Atchafalaya and Mississippi Rivers meet  which produce some of the most beautiful and one of the largest area of swamp land in Louisiana.
I wanted to arrive in Mansura at around 4:00 p.m. to watch the "Pit Crew" light the fires and hang the whole hogs in the cochon de lait roasting barn, built just for roasting pigs.  I arrived at around 6:00 p.m. to meet legendary cook and "Pit Boss" Gerald Wayne Lamoine.
The first thing that I noticed was Gerald Wayne all in black, wearing a large black western hat and  sporting a  45 caliber automatic  on his hip.  I immediately thought surely he must be the Sheriff or a Deputy and later found out that he was neither.
Gerald Wayne told me that " I grew up working livestock in the swamps of Avoyelles and when I was seven years old my Uncle gave me a hat, a sidearm,  put him on a horse and told me to  round up these animals."
"I  never take this gun off, I spent eleven years in the Army as a Ranger and when I came home saw no reason to go anywhere without it."

Yes, I would call Gerald Wayne a man's man!
After hearing that story I immediately made plans to meet Gerald Wayne in Bourdelonville, his home town, and spend a Saturday with him at his farm.  He told me they make butter, cheese and milk about 60 gallons of milk a day from his animals.  I also want to talk to him about doing a cochon de lait for me but not quite as big as the one he was doing today.
Gerald Wayne is legendary in these parts for his cooking and baking, cochon de lait and cinnamon rolls are his specialty, and  in fact the next day  was going to do a benefit pancake breakfast, serving crawfish etouffee on top of them instead of syrup.  Gerald Wayne is the go-to man when wanting to throw a big party and today he was in his glory.
Getting back to why I was in Mansura, "The Cochon de Lait".   I found out that they were cooking about 4,000 pounds of pork and and were going to serve a pork dinner for Mother's Day lunch between 10:00 a.m. and 2:00 p.m. the next day.  The proceeds were to benefit the Mansura volunteer fire department.
The hogs were split open from the stomach and laid flat between two pieces of heavy wire tied together and hung to roast rib side first.   Exposed to a roaring fire comprised of piles of oak and pecan wood,  these hogs were turned after about two and a half hours.  After turning the skin side facing the fire they were moved a foot or so back so not to cook the  skin side too fast.  The hogs began to drip after about  3 hours and the "Pit Boss" slowed the fire and slowly let them cook  for twelve more  hours turning every couple of hours throughout the rest of the night.
Originally, long before the Civil War, cooking was done outside with an open fire so that the pigs  could be tended and watched while working in the fields.
Gerald Wayne explained to me that the cochon de lait was done out of necessity in the early days.  A sow (female) can start having babies after about eight months old and can produce  8 to 12 and many times as much as 20 piglets in four months and can have babies twice a year.  He said that a sow could only feed so many piglets a day and the suckling pigs that could not get enough milk had to be killed and cooked so that the mother would have enough milk to feed the remaining piglets.   That is how the  cochon de lait was born, making the hog responsible for many great parties in Louisiana.  He told me that before refrigeration having cochon de laits were a common occurrence,  you could always find someone having a pig roast.  Today the cochon de lait is reserved for special occasions or outdoor parties.
I would recommend a trip next year to Mansura and the Cochon de Lait Festival .  Make a weekend out of it and tour the beautiful and scenic roads through this beautiful  parish.  I  put it on my calendar for next year, but will be going very soon to spend a day with Gerald Wayne Lamoine to see the real Avoyelles and hopefully find someone having a cochon de lait in their yard.
at May 11, 2010

A very interesting article, Jim! I have never seen pigs opened flat for roasting (instead of on a spit). I'll be sure to pass this on to my dad, our spit master!

wow! what an amazing sight! incredible! thanks for sharing this one.