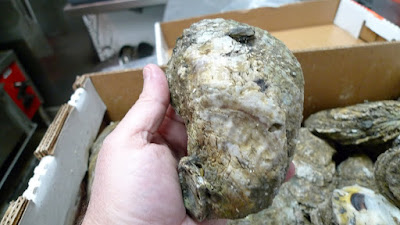 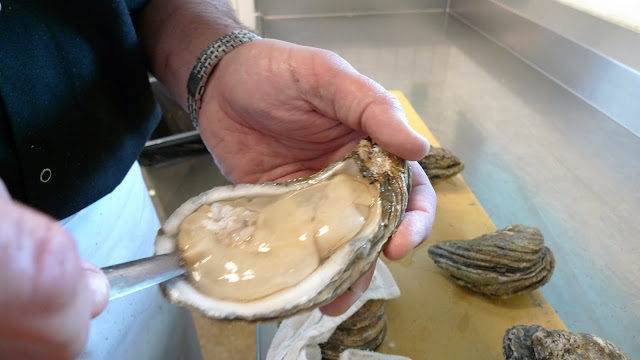 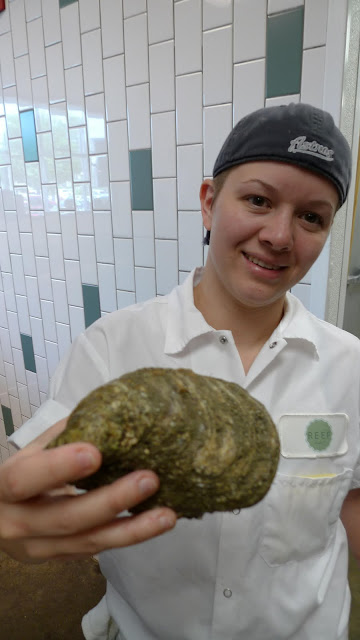 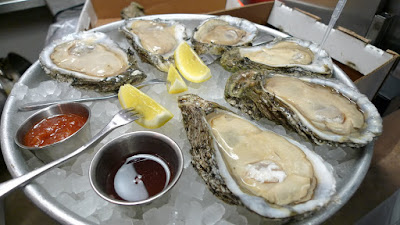 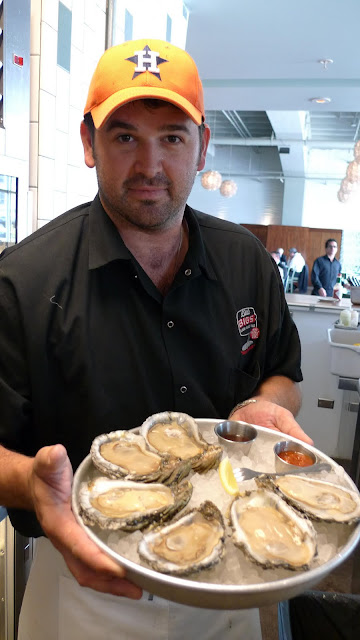 
One of the advantages of my job is finding and having the opportunity to try many  wonderful and interesting food products whether it be crabs, crawfish, shrimp, oysters or whatever fin-fish is in season.  Today happen to be oysters, which in fact is one of my favorite foods.  I  never turn down a chance to eat oysters.


Last week  fourth generation oyster farmer John Tesvich, with Port Sulphur Fisheries Co., called me and said "a couple of weeks ago I put out 600 oysters in 12 cages off of Breton Island to begin testing salt-water relaying as a treatment for cleansing and enhancing Gulf oysters.  We harvested the oysters yesterday, after a 15 day soak, and I was impressed how the oysters looked and tasted."


John sent me 3 boxes of his Breton Island Salts to test.  I was having a lunch meeting the day they came in with Chef Bryan Caswell, author and food critic Robb Walsh and Dr. Jeff Savell from the Department of Animal Science at Texas A&M University and figured who better to help taste these Breton Island Salts than these guys.


These were beautiful thick shelled mature oysters that were plump and both salty and sweet at the same time.
The taste got better as I chewed and after eating  left a wonderful taste at the back of my tongue.  These oysters if given the chance could rival any that I  have eaten and would be a prize for any oyster bar anywhere to serve on the half-shell.  We checked the salinity with a refractometor that showed the salt level of 45 parts per thousand.  I think that oysters with a salinity of between 35 ppt and 45 ppt taste best.


Here were some of the comments from some of our tasting panel:

Dr. Jeff Sabell "Wow, they can't get better than this!"

Bryan Caswell "I would like to echo Robb's remarks, your Breton Island Salts are one of  the sweetest, briniest I've ever experienced.  Jim gave us a box to test out on our oyster-loving clientele and the response has been phenomenal.  It makes me beam with pride to serve a Gulf oyster of that caliber.  My only question is how can I get more?"

I have been a proponent for many years of the oyster men pulling out their best tasting oysters from their best reefs and trying to market them with specific names as the East and West Coast oyster dealers have been doing.  Every oyster man has his favorite reef and oysters and the time has come for them to separate them on the boat before they are mixed with the sacks going to the shucking shops.

People now more than ever are wanting to eat local products and know where their foods come from.  With the renaissance of the oyster bar it just makes sense  for our fishermen to harvest their best tasting half shell oysters, name the reef they come from and market them at a price they deserve.  After all we have some of the best tasting oysters in the world and everyone in the United States should have the chance to eat a Breton Island Salt, Diamond Reef, Galveston Point or Apalachicola oyster.

I personally feel that the offshore suspension relay system if approved by the FDA would be great for the Gulf Coast oyster and may give them the chance  to be enjoyed again in all the oyster bars across America as they once were.


A study was done by Miles L. Motes and Angelo Depaola some years ago titled  "Offshore Suspension Relaying To Reduce Levels of Vibrio vulnificus in Oysters" (Crassostrea virginica)  ( This was the process that John Tesvich used to treat these oysters.)


Their findings were the following "Relaying of oysters into high-salinity offshore waters during the warm months reduces V. vulnificus to levels typically observed during January and February, two months in which food-born V. vulnificus illness has never been reported.  Thus, offshore relaying is a relatively simple process that the shellfish industry may employ to reduce V. vulnificus  levels in raw Gulf Coast oysters.

Give Gulf oysters a chance!

Email ThisBlogThis!Share to TwitterShare to FacebookShare to Pinterest
Labels: Oysters

Just dying to try these!