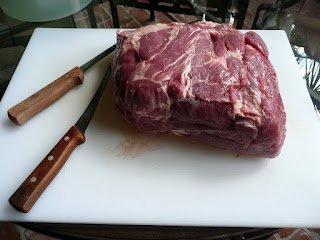 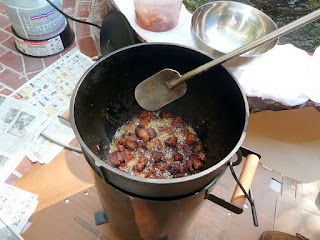 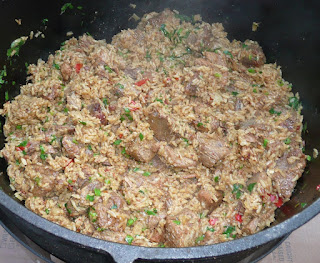 Saturday, Diane was baking cookies for a fundraiser that we were attending on Sunday afternoon. I decided while she was baking, I would take out our Jambalaya pot and make my great Grandfather's favorite Jambalaya, Pork, using Boston Butts.

I purchased two whole Boston Butts and diced them into 1- 1/2 inch cubes, seasoning with salt, black pepper and cayenne pepper. I used Louisiana hot sauce to liberally coat the meat before I seasoned it. I browned the cubes slowly stirring for about an hour and a half, until well browned on the outside then removed and added my onions and two jalapeno peppers diced. As the onions began to sweat, I added one large red bell pepper and cooked until soft then adding twelve diced garlic cloves. As soon as the garlic was added I put my browned meat back into the pot, added stock to make a gravy and cooked for about 20 minutes.

While gravy and meat were cooking I washed 6 cups of Toro Brand rice three times and then added it to my black iron pot with pork and gravy boiling. I then tasted the broth and seasoned to taste so that the added rice would have a well seasoned flavor when cooked. I then let boil for about 10 minutes then covered and turned the burner as low as I could for 25 minutes.

While Jambalaya was cooking I cut up two bunches of green onions and a large bunch of parsley. As soon as the the rice was cooked in the Jambalaya, I added the greens and stirred it all together.

Everyone that stopped by Saturday, took home a large container of Pork Jambalaya. Saturday night though I wished I had kept an extra container for supper. While cooking I am never hungry, but later on I always wish I had kept leftovers.

Email ThisBlogThis!Share to TwitterShare to FacebookShare to Pinterest
Labels: Jambalaya