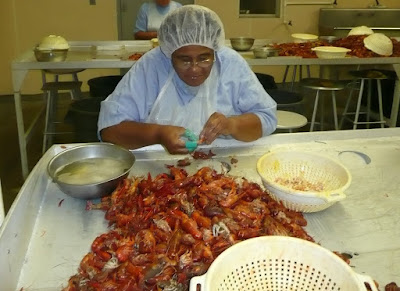 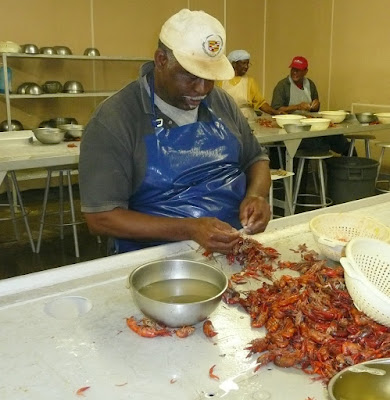 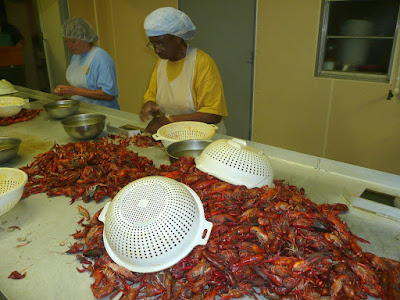 Pile of Crawfish on Peeling Table 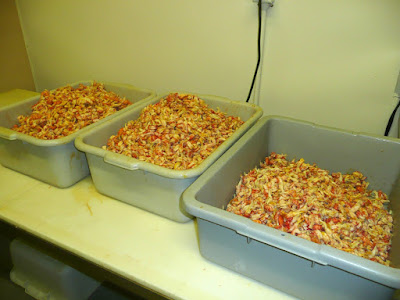 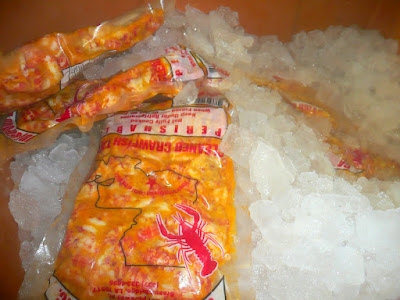 Last week while working in Louisiana I had a chance to visit an old friend's crawfish peeling plant which is now being run by his daughter Rose and nephew Greg.

Lionel Hayes was the first person to start peeling crawfish commercially. He told me that while selling live crawfish for Joe Amy in Henderson, Louisiana he had 7 sacks of crawfish left over one afternoon. He dropped a few sacks off at each of his sister's homes to peel so that he wouldn't loose the crawfish. After they cooked and peeled the crawfish he asked one of his large customers, which was Don's Seafood & Steakhouse restaurant in Lafayette if they were interested in buying the crawfish tails. Don, Ashby and Willie Landry said that they would and thus an industry was born. During the early 50's restaurants that served crawfish etouffee, bisque and stew had to peel them which required extra labor during crawfish season.

Joe Amy owned a grocery store in Henderson and decided to open a peeling plant and have Lionel run it for him. Demand for peeled crawfish began to grow as more restaurants and supermarkets needed the meat

Lionel later opened his own plant and during the early 70's I began buying from him for my own first restaurant. We opened more restaurants and a wholesale company and eventually bought most of his production. He had the best peeled crawfish in those days and his reputation for top quality remains today.

Lionel died last year, but his daughter and nephew have kept his high standards and still produce one of the best peeled crawfish in Louisiana.

I knew Lionel for over 40 years and had the opportunity to spend many hours with him during crawfish season. When I hear the word crawfish I can't help thinking of Lionel Hayes, he was a pioneer and great friend I truly miss.
at April 16, 2009

Email ThisBlogThis!Share to TwitterShare to FacebookShare to Pinterest
Labels: Crawfish