I met Jules in 1979 while buying oysters from Capt. Hayman Pitre in Grand Isle, LA.  Jules, a bull of a man, known for throwing two 120 pound sacks of oysters, onto the  back of a trailer truck at a time. I had also heard of his grannfather, Capt. Beto Eymard, like Capt. Hayman, both legendary fisherman on the Bayous and Bays of South Louisiana.  They were both known for their delicious Barataria and Caminada Bay oysters.

When Capt. Hayman introduced me to Jules little did I know a lifelong friendship was born.

I started buying oysters from Jules in 1983 and have been a friend of him and his wife Melanie since.  We have eaten and enjoyed more oysters together than I could ever count.

His passion for his trade drew me in and his love of producing a great oyster  his loyalty and tenacious spirit  has kindled our lifelong friendship.

About eight years ago Jules could see the handwriting on the wall and realized oyster populations would never be like his father, grandfather and great-grandfather's enjoyed and started looking for other choices to focus his passion.  He knew that he was not going  to see the volume to be able to fully utilize his 65 foot steel hull oyster boat named, My Melanie.  A beautiful boat but too expensive to operate with the diminishing stock of wild oysters, crew members and $200 dolllars of diesel a day made it unsustainable.

It was March 20, 2010 when giving a talk with author Robb Walsh to an Oyster Industry Convention in New Orleans, that I met Dr. Bill Walton that led to the the Caminada  Bay Oyster Company.
Bill is the Senior Marine Scientist, Associate Professor, School of Fisheries, Aquaculture and Aquatic Sciences at Auburn University.

I had spoken that day of the need to specify the location, reef or bay our  oysters are coming from and giving them a distinction rather than a generic Gulf Coast Oyster.  This term had been used since the 50's and 60's.   Prior the that people knew where their oysters were from on the Gulf Coast. Certain bays and bayous were highly prized for their distinctive  taste and flavor and were sold as Bayou Cook, Barataria Bay, Caminada Bay and the such. 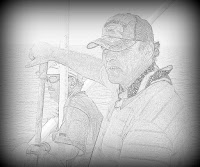 Bill had mentioned to me that Steve Crockett, in Grand Bay, Alabama was growing oysters from seed, supplied by Auburn's Fisheries lab and was using an off bottom oyster mariculture  process.  This intrigued me, I asked Bill if I could come down to Bayou LaBatre, AL to see what he and Steve were doing.

Knowing that Jules was looking to find another profession, which I know he would never be happy with, I asked him to ride down to see what was going on.  I told him if he would be interested,  I would help him get started and guarantee  sale of all of his production.  In return would I have a new hobby  and all the oysters I could eat.  Little did he know how many oyster I could eat.   On the ride home he said " Can you sell them, if so I can grow them".

Below is Jules' grandfather's boat hauling a load of seed oyster to Independance Island in the 1940's
The Barataria Basin yielded an oyster know as the "Aristocrat of the Oyster World", which he hopes to duplicate that taste at his new farm.  His Barataria Bay farm has been passed down to him for three generations.

These oysters below were grown from seed using off-bottom mariculture  to compete in the North American Oyster Showcase in Gulf Shores, AL in 2015 and 2016.

In Rowan's latest book, The Essential  Oyster he talks about Jules' Caminada Bay and Beauregard Island oyster.  He says "With cages to protect the flock from marauding oyster drills, he has been able to produce the platonic ideal of a Louisiana oyster: a huge, plump dumpling of an oyster with the biggest adductor  I've ever seen on a farmed specimen.  The sweet adductor balances the salty belly and gives a lot of chew to the oyster--- just like Louisianans like it".

It takes someone that believes in the product because it cost more to produce than a wild oyster!

Jules has found other visionaries that get it, like Dickie Brennan, of the New Orleans Brennan Family of Fine Restraurants  and Dan Causagrove of Seaworthy, that have seen the value of promoting locally grown seafood.  Thanks to these three gentlemen and those that have reached out for his oyster and giving this new to Louisiana technique a chance.
It takes chef's with vision to see that even if a fisherman produces a great product, it takes someone to market and make sure that fisherman makes enough money to stay in business.

It takes a successful fisherman to makes sure we continue our Gulf Coast fishing tradition and assures us all access to the best tasting seafood in the world.

Jules works his farm alone, with his wife Melanie,  helping with the accounting and reporting necessary to run a business.  Having built quite a reputation for their terrific farmed oysters, thankfully his demand has outstripped his supply.  This has encouraged him to expand and hopefully all those interested in his oyster will have access.

We are all lucky to have fisherman with foresight to see that sometimes doing what your grandparents and parents did is not enough and needs a little change.

Jules has put down his dredge, hand selecting every oyster he grows!

He has changed how he cultivates and grows oysters but like his ancestors is still striving to produce the best tasting oyster on the Gulf Coast!  He like his father and grandfathers before him were trailblazers, he's following his own path that is creating quite a wake on the bayous of South Louisiana.

He was the first fisherman in Louisiana to apply for and obtain an Alternative Oyster Culture license. Jules proudly shows off his  #001 in the State of Louisiana.

A true pioneer and visionary for the oyster industry, the way his ancestors were.


“As I ate the oysters with their strong taste of the sea and their faint metallic taste that the cold white wine washed away, leaving only the sea taste and the succulent texture, and as I drank their cold liquid from each shell and washed it down with the crisp taste of the wine, I lost the empty feeling and began to be happy and to make plans.”   Ernest Hemingway