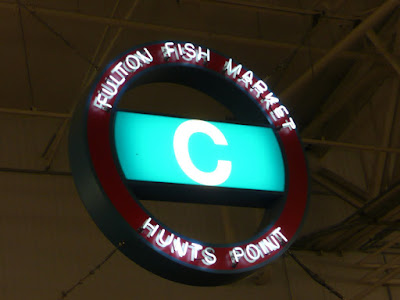 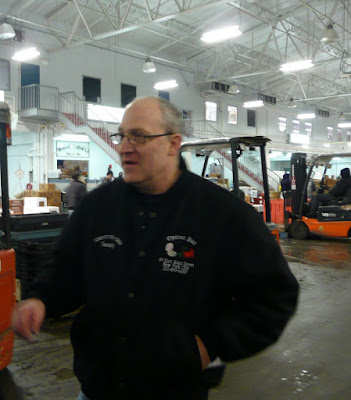 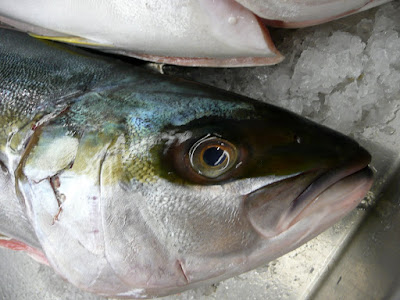 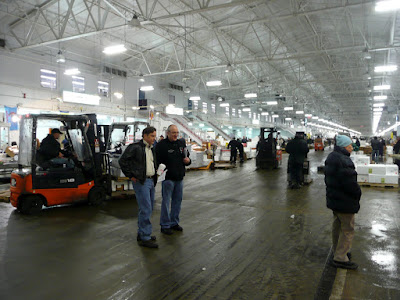 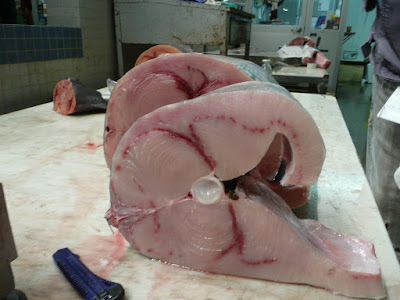 The Fulton Fish Market's hours of operation are from 1:00 a.m. to 7:00 a.m. Monday thru Friday. Last week I had arranged to meet Sandy Ingber, the Executive chef of the Grand Central Oyster Bar at 4:00 a.m. Wednesday morning. We left in a cab from Manhattan at about 3:15 in a cab for the 30 minuter ride to Hunt's Point in the Bronx. We arrived early and made our way to the arranged meeting spot with Sandy. The place is one of the largest coolers that I have ever walked into all 400,000 sf of it. We were to meet at Blue Ribbon Fish Company. They are the company that consolidate and put his orders together that he purchases throughout the market. After meeting Sandy and getting the run down of the market we began to walk and check out each stall. Sandy knew everyone around the market and as we walked and made purchases his friends would come up and let him know what was their freshest fish today and what he should expect to see coming the rest of the week. The market was bustling at that hour with forlifts running around like cars on the streets of Manhattan and people picking the fish seafood that was going to be served in the city's restaurants that day.

The market first opened in 1807 on land donated to New York City, and at first was a general market for both fish and other goods. In 1822 the fish merchants occupied a new Fulton Fish Market building, located on South Street between Fulton and Beekman Streets.

We left the market about 7:30 was picked up by by a friend and headed to his lobster warehouse about 1o minutes away.

I had been up since 2:30 am, probably should not have gone to sleep, but knew that if I had not I would be sorry that afternoon. It was time for lunch and Mary Fish Camp in the West Village was where my next meeting was with another supplier, I could hardly wait for the whole belly clams and lobster rolls.
at March 22, 2009